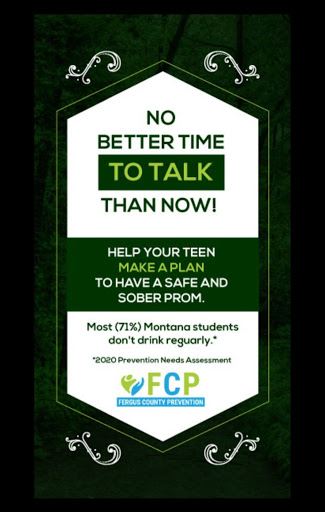 Overall, I’d say this event was a huge success! This event allowed me to engage key community stakeholders to include local businesses, the DUI task force, High School Aged Students who attended prom, the parents of these students, and school faculty. The attached messaging was given to local florists before prom to include in boutonniere and corsage boxes and promote communication between parents and their youth about maintaining sobriety at prom. The prevention messaging for youth included the statistic that “Most (71%) of Montana students don’t drink regularly,” and encouraged teens to “spend prom the way most Lewistown students do without the distraction and dangers of alcohol and drugs.” As students were entering Prom, I was able to work with the DUI Task Force on their “Zero Hero” Event, breathalyzing students entering prom and passing out additional cards. Students who participated will be getting a t-shirt that was designed by one of their peers. Following the event, there was an after-prom party that was put on by Junior parents at the school. While I was not able to get a foothold in this portion of the evening this year, it will be something that I plan to participate in in the future!